One story of surviving as an artist in the USA, from the collapse of the music industry to the housing crisis to the pandemic.

Occasionally, for one reason or another, I feel inspired to write an essay about my personal finances, mainly because, for me, it’s an interesting perspective, the really up-close and nitty gritty one.  But also these days, the plight of artists is often in the news, along with the plights of many other people, and I have been regularly getting messages from people who are concerned about my welfare in these times, and wondering how I’m doing. Sometimes they assume that because I’m doing a lot of writing and organizing around rent strikes and eviction defense, I must soon be facing eviction
myself.

If you happen to be one of those people wondering about such things, but you’re not interested in the lengthy explanation, the short answer is up til this point, me and my family are doing OK, with no imminent prospect for having to either sell or move into our car.  We’re able to pay for rent and food despite the lack of work, and although there has been very little in the way of government assistance we’ve been able to access otherwise, we do have free health care for the most part, here in Oregon, if you’re poor enough to qualify, which we are.

For the more involved explanation, I’ll start with a brief recounting of the situation for me and many other artists prior to the pandemic.

For those of us old enough to have been working as touring musicians in the 1990’s, the music industry overall was about five times as big in 1997 as it was in 2017, when it finally stopped collapsing. From the major labels to the folks playing in the local pub, the whole industry has shrunk radically. Unevenly, at different times for different types of artists and to different degrees, but across the board. The main reason for this phenomenon has been the rise of the internet, and then particularly the unregulated corporate internet, and the rapid decline of the phenomenon of music fans purchasing CDs from artists at concerts, which is where the vast majority of such sales used to take place, among independent artists.

For me and many other indy artists I’ve talked to, 2013 was the year the floor totally dropped out of merch sales. It’s not a coincidence that this was also the year Spotify launched the free version of their music streaming platform. Spotify perfected a sort of corpse-feeding version of a new music industry, very much like what Uber did to the taxi business – in both cases, operating on an industry-destroying, investment-sustained business model whereby they function at a loss until they take over the world in the process, with lots of political corruption and government connivance, from
Sweden to the United States.

As this process was taking place, the cost of housing kept rising in most parts of the US, the UK, Ireland, Australia and so many other countries I’m personally very familiar with. The rise in the cost of housing has also been associated with the same sorts of predatory corporate consolidation and bribery of legislative bodies, a la Spotify and Uber, incidentally. Real estate prices have also affected the music venues, which have been rapidly  disappearing, charging instead of paying, and/or relocating into smaller spaces. A concomitant phenomenon has been the disappearance of the
once-lucrative college circuit.

The shrinking of the music industry has been reflected in other statistics aside the 80% reduction in sales overall. Between the 2000 census and the 2010 census, 41% fewer people claim to be professional musicians in the US. (And that’s well before Spotify’s free tier.) During that same period, between those two censuses, the city of Portland, Oregon also lost about half of its Black population, which is an interesting correlation. Basically, people who were living close to the wire before the turn of the century became unable to live here ten years later. You can be sure the same sort of pattern took place in many other cities at more or less the same time. As I sit here now in this two-bedroom apartment, it was recently announced in the business press that the average Black family in the US cannot afford to live in a market-rate two-bedroom apartment.

With this multiplicity of obstacles – to recap, half your income that used to be represented by merch sales disappearing, eventually be be replaced by minimal amounts of streaming income, while your housing costs double and your ability to make money from touring decreases due to the same housing crisis and its impact on small businesses – it’s not surprising that so many artists, probably by now a solid majority of them, had to stop being professional artists, find another job or two, and turn their art into a hobby, when they have a chance to get to it.

A tiny percentage of artists who have produced multiple hits might be in a position to live off of royalties from radio airplay and Spotify. Those who essentially couldn’t live off of 20% of their former incomes had to find other ways to make ends meet, as the living they were making in the 90’s wasn’t all that great, either.  The main options were finding other jobs that they could do in between tours, to tour a lot more to try to make up for other losses, to turn to different forms of patronage – crowdfunding or grants or some combination thereof – or to throw in the towel.

I was personally sometimes able to crowdfund successfully enough to pay for recording projects, despite the loss of any income from selling the results in any form. I was never able to make up for the loss of income from merch sales collapsing, however, so rather than trying to tour more or get another job, I turned towards patronage in 2013, on the advice of a wonderful accountant here in Portland. I didn’t realize it at the time, but retrospectively, it’s not a coincidence that I started crowdfunding patronage, at first only through my own website, later also on Patreon and Bandcamp, in the same year that Spotify kicked off it’s free tier.

As it happens, my pursuit of the patronage model just reached the point at the beginning of this year where, between the three aforementioned platforms plus streaming royalties, it adds up to rent plus food — just before the arrival of Covid-19. 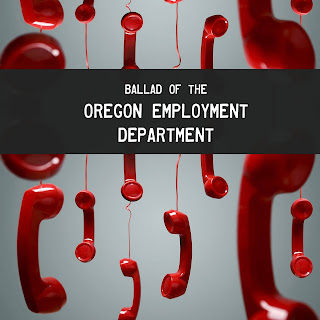 What has become abundantly clear since the pandemic hit is the fact that the level of success I’ve achieved with crowdsourced patronage – paying for rent and food — puts me in a crowd of not more than 2% of formerly professional musicians out there. Everybody else had to tour, usually a lot, whether they wanted to tour that much or not, as I always also needed to do, much as I generally enjoyed it and look forward to someday doing more of it. And most of those artists also needed to work additional jobs aside from touring. Those who thought they had some kind of security because they had multiple sources of income – namely, income from touring, and income from working a
service sector job of some kind – have discovered they didn’t have job security in a pandemic after all. We hear every day from NPR and many other news sources about all the artists, service sector workers, and so many others who have been surviving from the extra federal pandemic $600 a week on top of what would otherwise be usually an insultingly tiny pittance from the state employment
department, how tiny depending on the state – and that’s if you qualify as a gig economy worker for such a privilege, which in Oregon, you did not. For those lucky enough to get through to the
Employment Department and receive this federal money, it ran out at the end of July, and millions of people, be they artists, service sector workers, or a multitude of other professions who are out of
work, talk about being on the edge of a financial cliff currently. For a staggering number of unemployed gig economy workers – still tens of thousands in the state of Oregon alone – money from the Employment Department has never come, after five months, and when we call, the line is literally always busy. (I wrote a song about it – “Ballad of the Oregon Employment Department.”)

As with so many other things, there is suddenly a much more widespread and much more talked-about awareness of how badly Spotify pays artists, how high the rent is, how much it costs in the US just to have internet access, and so on. Much more talked about is the fact that most artists aren’t making a living at their art. I guess for a lot of people, including so many artists, it was just assumed that of course you were working a day job in a cafe in order to afford to do gigs in the evenings. But now it’s been broadcast on Marketplace and elsewhere, it’s official, they almost all have other
jobs of some kind, and most of them have lost all of them.

With all this press came a flurry of donations to me and many other artists.  I don’t know about everyone else, but for me they were significant.  They went a long way to make up for the loss of income from several canceled tours.  We did better than covering basic expenses, we even paid off half of our credit card debt.  The donations slowed down after the first couple months, and I imagine other artists also had this experience.  Which means they, and I, returned to what was the status quo after the pandemic hit, but prior to the flurry of donations.

In our apartment, we stopped paying the rent to our usurious corporate investor slumlord, The Randall Group, last April, because there is a suspension on evictions here, and out of solidarity with all those folks, such as the 98% of artists, by my estimation, who are currently unable to make ends meet unless they’ve got an inheritance, or a different job that didn’t disappear when the pandemic hit. We take our rent money and put it into a savings account every month, on the assumption that we may eventually have to pay all or part of it, in order to avoid getting evicted.

People regularly tell me I’m very productive, with all the interviews I’m doing and songs and other things I’m writing during these past five months, since I canceled the tours I had planned in nine different countries. If that’s true, it’s only because I’m part of a tiny little privileged group of artists who is both willing to beg, and good enough at doing it online after years of trying, to eke out a living at it.

I’m hesitant to even admit to this accomplishment, lest it vanish.  Perhaps somehow once the stock market finally crashes, my numbers of patrons will, too? But for the moment, despite the precariousness of my profession for so many others – a profession so precarious that few people readily even conceptualize it as such – I sit here with my little, now unschooled family in this apartment, and I feel like I’m standing on a nice green hill, watching the valley below burning.  Which a valley is literally doing, not far to the east of here, just to illustrate the point.